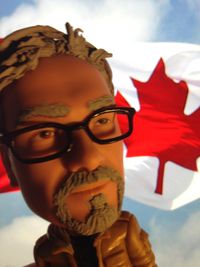 Sheryl's Crush is ...
From Toronto, Ontario, Canada. Our stuff is not easy to peg but we think it's a cross between Johnny Cash on steroids and Talking Heads on valium.

Who are we really?

I was born in Montreal, Quebec, moving to Ontario when I hit my teens and I've been a Toronto resident for some 40 years. I had a day job in government for 28 years - you know the old joke when someone hears you play and says: "don't quit your day job"? Well, no one said "don't retire!"

I'm now a free agent and have way more time for music. I always have trouble describing my style - most recently trying to explain this to Lisa Loeb at a show. The Johnny Cash and Talking Heads reference above suggests something but I think the quickest way to nail it is to call it 3-chord rock or folk - depending on the guitar I'm using. It's a bit of throw back to when rock was young(er) and punk was young(er). Sometimes, I'll throw in a few extra chords for good measure. Mostly the lyrics are social commentary with a 70's era feel. And I don't tend to write ballads or dance music or but I do try to provide a catchy enough chorus so the songs can sit in your head.

Want to join me? Join my mailing list and we can grow together. I'd love some hard core reaction to my tunes. And I'll give you some reaction to anything you'd like me to. Gotta' a blog or something? Also into music making? Let's do the social media thing.